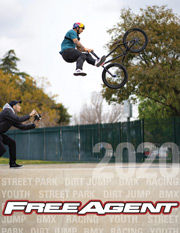 Jared Eberwein hails from Riverside California. He specializes in dirt, park and street. His favorite spot to ride is at the Jurupa skatepark with his two boys. When he is off the bike, Jared like to put on his tool belt and build things around the house. He also enjoys taking pictures and videos.
Slideshow
View 15 photos

Daniel Sandoval never set out to become a professional BMX rider. He just started riding his bike in the skatepark every day after school as a kid, and one day a few older riders taught him how to do tricks. In 2014, he earned his first X Games medal, a bronze. He followed that up the next year with an even more successful performance, landing his first X Games gold medal in 2015. Daniel is also a member of the Team USA Olympic Freestyle team and will competing in the next Summer games in 2020.

Andy Buckworth has been riding for over 20 years. He grew up in the small town of Lake Haven, California; he now resides in Menifee, CA. where he enjoys riding his ramps in his backyard. His favorite place to ride is on the dirt at the X Games. While growing up in Lake Haven, Andy came across a BMX video that gave him the push to start riding and he hasn’t looked back since. His is a bronze medal winner at the X Games, has competed in the Dew Cup, he spent ten years riding with Nitro Circus, and has many Triple Challenge podiums. But he is looking to grab himself the gold medal at the X Games. His favorite trick is a flip bar no hander. He rally loves the rush that he gets every time he pulls that trick. He once broke both of his legs, at the same time. The scariest trick that he has done is a no hand double front flip.

Jeremy hails from the high deserts of Lancaster, CA. and currently resides in beautiful Lak Havasu, Az. He has been riding for just over 5 years. He started to ride because all his friends started riding BMX. His favorite tricks are 540 flairs and 360 triple whips. The tricks that scare him the most are 360 quad whip and 360 triple whip to bar. Over his 5 years of riding, Jeremy has received many, many injuries. His favorite places to ride are the SSpostofice and his local park, Lake Havasu Skatepark. Jeremy is best known for receiving first place at the best trick Fise Hiroshima Japan, first place best trick at Fise Montpellier France, second place overall at Barcelona Xtreme, and third place at Toronto Jam. When Jeremy is not riding his BMX bike he enjoys Mountain biking, off-roading, and ride his pit bike.

Jack hails form Bundaberg Australia and is currently living in Oceanside California. Master of the front flip, Jack enjoys riding at Esco skatepark. Jack is very active on Youtube where you can find him riding, rappin or even getting a new tattoo. Jack is a family man, with two kids and having races on who can eat more Nutella.
Slideshow
View 4 photos

From Memphis Tennessee currently living in Huntington Beach California, Ricky has been riding BMX for over 10 years. Growing up in the dirt, you will find Ricky ripping it up on dirt jumps whenever he can, but he will still hit up the local skate parks as well. Ricky is just as passionate in his love of photography as he is of BMX.

Dustin is from Vista California and has been riding BMX for over 20 years. He enjoys riding dirt trails. As a father, he loves to spend time with his son and he can be found putting on great show for local schools and help teach kids just how fun BMX riding is. When he is not on the bike he likes to be working in his garage on his hot rod cars.
Slideshow
View 2 photos

Seth hails from Riverside, CA. He has been riding freestyle for the last 5 years, and before that, he raced BMX for 4 years. It was BMX racing that got Seth into freestyle. His favorite place to ride is Jurupa skatepark, his favorite trick is Indian air seat grab. Fun fact about Seth is that he has a clone! well, not really, he has a twin brother. When he is not riding his BMX bike, Seth enjoys going to the gym, kickboxing, and surfing.